Rinco Ennema of the Dutch webzine Rock Affairs is a wonderfully descriptive writer, profoundly observant and insightful in his critiques. He previously reviewed the metal album, ‘Synemotion’ when he ran the website Progpraat.

Here he is with yet another review on his new website Rock Affairs. I truly appreciate how deeply he goes into the meaning of each song and how eloquently he puts it into words.

The first number immediately kicks ass. ‘Red Lion’ is a powerful song that uses traditional instruments such as guitars, drums, violins and bass, but also a toumperleki (also called ‘goblin drum’) is used. In addition, the voice of Olivia can be heard, not singing but her voice ‘playing’. There is a nice rhythm in this song, a beech festival where you quickly feel at home.

‘Bee’ starts a little quieter but do not be mistaken in the inner strength that is about to be released. With sufficient volume from the speakers this is a treacherous hypnotic musical sculpture. Delightful riffs and teasing strokes on the guitar create a tension field that is abruptly canceled when the song stops.

‘Androgyny’ would tell the story of a person who has divided thoughts but later comes into balance and experiences unity by constantly wondering whether his / her reflections are correct. So far the intellectual. In addition, it is just a seriously fine piece of music to listen to, the “yeah’s” of Olivia are ointment to the ears.

‘Ressurection’ then. A track that states that the person in question has become what he / she always was, but never knew. Master of the spiritual and physical world. A number in which is being experimented with drums and that comes out fine.

What then happens is the middle between a ritual Indian song and the expulsion of demons. In ‘Dragon Kiss’ a lot of guttural sounds are produced and the voice is used to express emotions that can be emphasized with normal instruments, in a trance-generating way.

That the voice is an important factor on this newcomer from Oh. is very clear in the last song ‘Triumph’. Actually, this song connects seamlessly with ‘Dragon Kiss’, the passion splashes off. Nice ending of this, again too short, CD of Oh.

‘Metallia’ is what it is, not music for fragile souls but a short-lived storm of instrumental music (since the voice is not used for words, but for sounds) that will suit the enthusiast of powerful, progressive and experimental music. 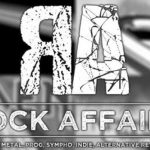 Rock Affairs is an independent Dutch magazine for lovers of rock music, with an emphasis on progrock, symforock, alternative and indie rock.