Fluence: A Goldmine of Advice for Indie Musicians
by Oh. on March 29, 2015 in Indie Musician Resources reviews
ShareTweet
Subscribe 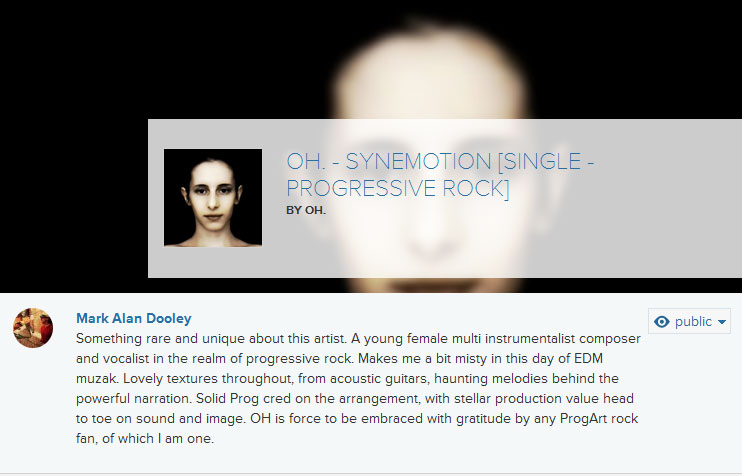 A couple years back I had looked into a couple of those music websites that connect you to A & R and music representatives for a fee and I tried a couple of them. On those websites there wasn’t much information available, you couldn’t read much of the advice given to other artists and then (I haven’t been back) their blogs didn’t have any helpful advice for Indie musicians.

Today though, I stumbled upon a fantastic resource, a app called Fluence. Within minutes of reading their blog, I got enough helpful advice on how to re-edit my press release. So I signed up and read on further.

Before even submitting my music, just reading through the bios of the 100+ music curators in there, was a goldmine of information about the present music business. Links to blogs, radio stations, and musician resources. Having so many of the top music professionals in one place, with their helpful advice, reading through their other critiques of fellow artists work, was very helpful. Everything very transparent and upfront.

To get feedback on your music from experienced professionals is precious in this time of overwhelm, but even if you don’t go and submit your music for review, the site has such a wide variety of curators in all genres of music, it is as if you get a multitude of guides showing you the music biz terrain in one place.

I did receive a wonderful, generous and sensitive commentary on “Synemotion” from artist and producer Mark Alan Dooley @MarkAlanDooley (Twitter) on Fluence…He writes:

“Something rare and unique about this artist. A young female multi instrumentalist composer and vocalist in the realm of progressive rock. Makes me a bit misty in this day of EDM muzak. Lovely textures throughout, from acoustic guitars, haunting melodies behind the powerful narration. Solid Prog cred on the arrangement, with stellar production value head to toe on sound and image. OH is force to be embraced with gratitude by any ProgArt rock fan, of which I am one.”

And some “straight-talking” to the point advice from music editor, radio host and journalist, Trina N. Green @dharma69 (Twitter)

Well, this is unique. First, let’s take a moment to appreciate the fact that this is all the act of one person. Moving past that, while I don’t consider myself markedly knowledgable in the realm of progressive rock/metal, there’s a lot to respect here, particularly because this is pretty brave work. Lyrically: gorgeous, heady and thoughtful and presenting it in spoken word format – wow. The musicality is solid but I think there’s one thing that might make this song punch harder. There being some form of a sung chorus or bridge woven through verses, some vocal melody to latch onto if that makes sense. Also, perhaps warming up the sound a bit and bring it more forward could result in it sounding larger than life. Something this bold should sound so bold.

For the song “Run Away“:

“Sensual and edgy progressive rock — and from a female composer/guitarist?? If so, that would be truly awesome, and something of a rarity, especially in the progressive rock world, so something you could capitalize on, the world is ready for it. Would like to see more of a performance in the video (ie playing guitar) — the performance is the most intriguing part of the video to me. The ‘journey through complex emotional states’ story is a plus — but it’s the rocking guitar and sound that draws me in. Instrumental progressive rock doesn’t have much of a place on commercial radio so this may be a hard sell, but production values excellent, its ready to go. Thanks for your submission, good luck with your music.”

I’ll be updating this when the rest of the “auditions” come in.