Stills from “The Making of Metallia”
by Oh. on January 16, 2019 in Behind The Scenes Metallia

The Making of Metallia by Oh.

The journey of an avant-garde progressive metal concept album in six-parts by the Greek multi-instrumentalist Olivia Hadjiioannou.

This mini-doc gives a peek behind the curtain of what it takes to make an album – with exclusive footage from the Greek multi-instrumentalist Oh. while creating the progressive metal EP “Metallia” from the recording process to the visuals, cover art and finally printing and distribution. 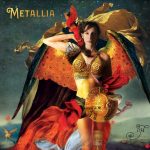 “This is not a garrulous display of technique. There is inspiration, delineations, intense vision, to the point of fever pitch chaos, which will delight the “metal” senses and is altogether a monumental showcase. The girl seems to have more riff in her, than half the Greek heavy metal scene of the past 10 years. ” ~ “Pan Pap” – Rocktime.gr

It’s still a mystery to me, how a young lady like Olivia can invent, perform, and produce such a gorgeous piece of musical art. I suppose she got somehow a blessing from the forgotten gods of Olympus… No, really. It’s a wonderfully creative and inventive EP which sounds much more substantial and thought-provoking than many recordings from well-known grandees of modern instrumental Prog-Metal. ~ Igor Gorely – R.A.I.G. Records (Progarchives)


‘Metallia’ is what it is, not music for fragile souls but an evanescent storm of instrumental music (the voice being used not for words, but as sound) that will suit the enthusiast of powerful, progressive and experimental music.” ~ Rinco Ennema ~ Rock Affairs

“Do you get bored quickly by the standard prog metal music offer? that will not happen to you with ‘Metallia’! ~ Herman Beunk – Xymphonia

“Oh wow! What the bloody hell’s going on here then? Freshness. Uniqueness. Boldness. An outlier! Call it what you like, but this is anything but your typical run of the mill, bog standard, meat and potatoes, vanilla-like metal.” ~ K-MaNriffs – Blessed Altar Zine

Metallia has already drawn the attention of progressive circles, but they have yet to analyze the enigmatic, versatile, bold, suspiciously attractive style of its music.This is one of those circumstances where you think you have heard something similar before, but you can not parallel it with something recognizable. Her material sounds “metallized”, adventurous, and has a cinematic affinity. Above all, however, the sound is disruptive, the vocal injections arouse this impact. Clearly interesting, in a sense, it could be co-production of Shrapnel and 4AD. Check it out. ~ George Politopoulos – Flight of Pegasus

Listening to Metallia, expect to be unexpected. Nothing is obvious here, nothing sounds as you would expect, and surprise is surprising. ~ Artur Chachlowski – MLWZ

An excellent example of how instrumental guitar albums can still sound inspired and interesting. – Jupiter Variation


“In 2008 Jannick Top sent a shock wave through progressive rock community with the release of “Infernal Machina”. The sound that he created on that album was absolutely unique, a fascinating collision of zeuhl, metal and primal screams. Now after ten years I found the same formula rediscovered and applied, again with astonishing result, by OH. (Olivia Hadjiioannou) in her new album Metallia.” ~ Tomasz Grzywalski – Secret Exhibition

“The hidden leitmotives and recurring patterns in the compostion reveal themselves only after multiple listens and make this EP a real grower that you will return to over and over again and still be surprised and impressed every time you hear it. With Metallia, Olivia Hadjiioannou has proven to be an incredibly gifted and creative composer and technically talented musician. If you are tired of progressive bands repeating the same old stuff over and over again, look no further – Oh. has you covered.” ~ Matt S. – Metal Soliloquy

“Only after a few passages does the open music lover begin to discover that the pieces are multi-layered and rich in detail and that the electric guitar is only used as one means of expression among many. Besides the parts for the guitars and drums, one discovers the ethnically coloured percussion, the creative rhythms and breaks and the polyphonic, mostly very wild vocals as well as the more extreme and unusual sounds that one can elicit from the human vocal cords. ~ Siggy Zielinski – Babyblauen Seiten

“With top notes of Dream Theater and the intensity of Liquid Tension Experiment, Olivia takes the listener on a dark yet vivid journey that intersects the mind of Edgar Allen Poe and the imagination of Stephen Gammell” ~ Vinny Iacocca – The Closet Concert Arena

“Time to tell you about this stratospheric lady who comes from nowhere or from another planet, that of metal-prog-fusion-trash-dream-haunting and not only!” ~ Alain Massard – Profil Prog

“The most important adjective is “powerful”. Everything oozes power. The compositions, the sound effects, the arrangements, the use of dynamics in mixing; everything has received a large dose of attention, creating an epic sound. These elements make a grandiose mix, where nothing stays the same, except the powerful impression that it all leaves.” ~ Jerry Van Kooten – Dutch Progressive Rock Page DPRP

Olivia Hadjiioannou is always up for a surprise… After the quite heavy “Synemotion” album, she released a couple of distinctly art rock oriented singles. However, her latest EP is quite different from everything we have heard of her before: It’s a tour de force into high-grade prog metal realms with shredding guitars, sinister vocal layers, and unexpectedly transforming rhythm patterns. All music composed by Oh. All instruments played by Oh. An overwhelming one-woman show! Favorite track: Androgyny. ~ Sven B. Schreiber – Bandcamp

This girl isn’t afraid to sound unique with this gorgeous, mind expanding instrumental feast of experimental prog metal gifted with shredding riffs, eastern vibes, ethereal interludes and dramatic shifts in pace and complexity. There’s no empty virtuosity here though, since everything flows together into one sonic experience that never ceases to sound warm, emotional and organic. An ambitious and compelling endeavour. Favorite track: Androgyny. ~ Sauro Fabi – Bandcamp

“The whole thing is realized through multi-layered vocals, frenetic but harmonious guitar solos, ecstatic pounding riffs, imaginative violins, rhythmic basses and wild drums. It should Metallia hijack the listener in a wondrous acoustic landscape, which should make him forget everything around him.” ~ Joan Degener – Betreutes Proggen

A symphonic approach for “Dragon’s Kiss”, in truth a melodic melting pot to better blur the tracks, Olivia wanders according to her inspirations and goes from a nostalgic rock to a screaming and fusion metal, revealing an amazing skillfulness. The last “Triumph” track, which is a real slaughter, exudes a great freshness of inspiration and shows, if necessary, the imperial mastery of the lady.Impregnated with a heavy atmosphere, an eclectic and electric music with a fast tempo, this “Métallia” is a very beautiful album where the lovers of Olivia Hadjiioannou and the others will find what they are looking for! ~ Gabriel Badelier – Progcritique

“Time signatures change, bombastic elements come in and out, and it really feels like the listener is being swept along in a maelstrom, or being put inside a washing machine when it is at full pelt.” ~ Kev Rowland – Firebrand radio – Framemusic

“Truly mindblowing. And speaking of mindblowing, here we have a musician that seems to excel at everything she does. Fluent in drumming, bass, guitars, piano and violin!” ~ Peter Cox – Your Music Blog

“She has developed a musical style of her own, which can best be placed in the utmost corner of extreme prog metal” ~ Henric van Essen – Dutch Metal Maniac

“Olivia Hadjiioannou shows us the female side of progressive metal, muscular and aggressive like that of her male colleagues, but the Greek musician is also attracted by the contrasts between primordial chaos and latent tension that this can produce….The music does not stop at progressive metal with a symphonic touch but inside there emerge inflections that point towards Middle Eastern, operatic and Hellenic stylistic elements, all fundamentals that contribute to increase the melodramatic depth of the work. It must not have been easy to design the complex stratifications that make up the pieces in solitude.” ~ Lorenzo Barbagli – Open Magazine

“Olivia begins the Great Work by pouring the devastating fury of the Erinyes into inhuman vocalizations that fully invest the listener, annihilating him definitively with Sabbathian riffs and a killer groove. The sound is repeatedly fractured by acid lashed metal and by a percussive tribalism that the traditional toumperleki dominates, underlining its oriental features.” ~ Antonio Menichella – Hamelin Prog 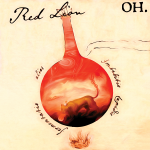 The sonic journey begins with the fiery “Red Lion”. Dazzling, dynamic prog-metal guitar solos amidst the haunting ancient rhythm of a bewitching toumperleki, groovy bass lines and eerie portentous vocals set the musical sojourner on his quest from the Prima materia to the creation of the Magnum Opus. 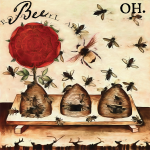 An acoustic flamingo based guitar introduces an abstruse beat forged from multi-layered vocals which lead to frenetic harmonic guitar solos shifting in time-twisting riffs collecting the delirium of the mind-matter and as a “Bee” transforming it to spiritual gold. 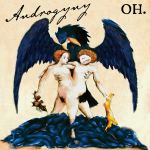 An ominous ethereal chorus introduces the stage of “Androgyny” – one’s conquest over duality. An ironic, menacing and taunting riff incites the seeker, as a celestial chorus awakens the hero on his journey. The blossoming of a self-expressive electric guitar meets the forces of inertia, apathy and the oblivion of nothingness. The unsteady hero though rises from the emptiness with a twisted, spiralling enraptured guitar solo as the celestial beings rejoice. 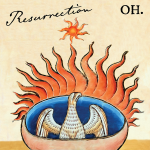 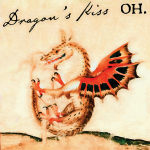 Kissed by the Dragon but not dissolved by it. “Dragon’s Kiss” is an epic propulsive build of percussion, guttural and lilting vocals, riffing electric guitars, fantastical violins, grooving bass lines and furious drums traversing dark sonic landscapes and imagery. 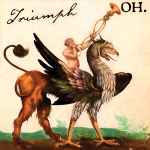 Read more about each song on Metallia by Oh. by clicking the images below