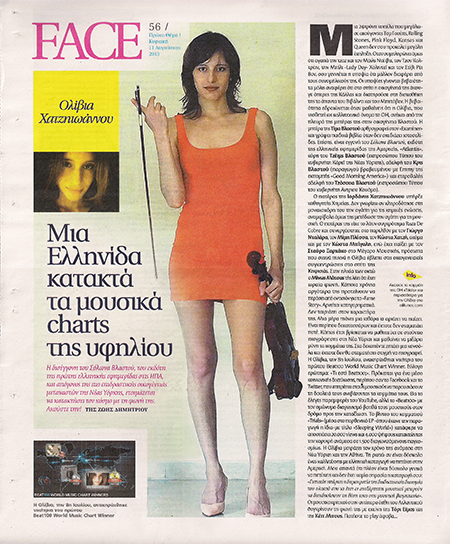 The great-granddaughter of Solon Vlasto, publisher of the first Greek newspaper in the U.S., and descendant of the most influential immigrant family in New York, prepares to conquer the world with her voice. Listen! BY ZOE DIMITRIOY

A 24 year old girl who grew up listening to Tom Waits, Rolling Stones, Pink Floyd, Kansas and Queen is not such a great surprise. When she loves jazz and Miles Davis, John Coltrane, Billy “Lady Day” Holiday and Stevie Ray Vaughan, one suspects she is rather different from her peers. Those suspicions are confirmed when at home, her family listened to the operas of Callas and their record collection contained the complete works of Vivaldi and Beethoven.

This certainty is further emphasized when we learn that Olivia, whose stage name is OH., is a descendant of the Vlasto family on her mother’s side. Her mother Tima Vlasto is a columnist and writes children’s books when not designing websites. Her mother is also the grand-daughter of Solon Vlasto, editor of the Greek-American newspaper, “Atlantis”, daughter of James Vlasto (past Press Secretary to Governor Carey of New York), and sister of Chris Vlasto, Emmy award winning executive producer of “Good Morning America” and half-brother Josh Vlasto (press spokesman for Governor Andrew Cuomo).

Olivia’s father Iordani Hadjiioannou is a professor of chemistry. I do not know if he bequeathed to his only daughter his love for chemical equations, but undoubtedly he passed on his love for music. Her father had the Latin music group, Raza De Cobre and collaborated in the past with George Dalaras, Mimis Plessas, Kostas Hatzis and even with Kostas Bigalis and has played with Stavros Xarhakos at the Athens Concert Hall, people who at one time or another Olivia met at family gatherings at home in Kifissia.

At the age of eight, Minos Matsas said she has a beautiful voice. Some years later she was offered the opportunity to audition for “Fame Story”. She refused adamantly. It didn’t suit her character. One day, she picks up a guitar and began playing. She was fourteen and since then never stopped. Later she acquires a small apprenticeship in a recording studio in New York and learns to mix her own music. At fifteen she asks for a mixing board and hasn’t stopped recording since.

Olivia, on July 8th, was the winner of the first Beat100 World Music Chart. A reasonable question: “What is Beat100?” It is a social network, somewhat like Facebook and Twitter, that enables musicians to present their work and upload their music videos. One might say it is similar to YouTube, but Beat100 has a contest that further helps musicians on their road to achievement. The video of the track “Trials” (a track on her debut EP – which she produced – titled “Sleeping World”) elicited 20.000 views and 4,000 votes winning the top place among 1,500 contestants worldwide.

Olivia splits her time between New York and Athens. I asked if it is difficult for a Greek artist to succeed in America. She answered that it is difficult to succeed in general and is not a matter of one’s origin. Fortunately there is the democracy of online distribution of one’s works so independent musicians can claim their place in the music industry. The music critics on the other side of the Atlantic compare her voice to that of Tori Amos and Kate Bush. Press play fearlessly …

This is a rough translation of the article which was featured in the “People” section of “Proto Thema” newspaper on Sunday, August 11th, 2013