Fany Polemi Interview with OH. on “Deep in the street” @ Streetradio.gr
by Oh. on September 16, 2015 in DJ's Interviews Press Radio
112
SHARES
ShareTweet
Subscribe

Steetradio.gr is an alternative internet radio station out of Athens, Greece with music news, trends, local and entertainment news.

Recently (September 10, 2015), I had an interview with Fany Polemi on her show, ‘Deep in the Street’ on streetradio.gr

OH. with Fany Polemi on 'Deep in the Street @ StreetRadio.gr

'Outtakes' from the interview on Fany Polemi's premiere radio show 'Deep in the Street' LIVE from Athens, Greece on StreetRadio.gr full vid coming soon :)Thank you Fany Polemi and Stefanos Grigoriades for such a great time on streetradio.gr 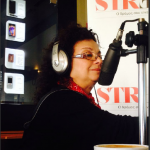 Fany Polemi is an actress, DJ and radio producer. She studied classical ballet and modern dance at Martha Graham in LA and graduated from the Drama School of Pelos Katseli.

As an actress she appeared in Apohairetontas (2005) and Lola (2008). She taught pantomime at the Philadelphia Children’s Creative Center in Athens, directed “We and Time” by John Presley, choreographed many performances ‘Mormoli’ in Komotini. She contributed to Nils Cholgkerson, the Toba in Little Lulu. “Thesmophoriazusae” Popular Experimental Theatre, “Screw” Thymios Karakatsanis, “Archontochoriatis” Theatre of Spring, “Telegonus” Margaret Lyberaki, “Ms. Eleni and her Colored Dreams” Dimitris Potamitis, “I Robot You;” Amore Theatre, “Exo oi Vodokokaloi” Theatre of the Sun, and participated in the children’s series ERT Patatouf and FaSoLa.

She presently DJ’s in Athens and produces the radio show “Deep in The Street” on streetradio.gr in Greece.

‘Deep in the Street’

Listen to interview on Mixcloud or below