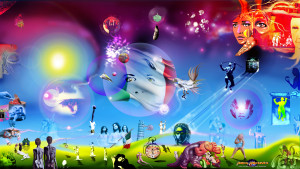 “This female, multi-instrumentalist from Greece has quite impressed me. Her debut EP “Sleeping World” is impressive from the start just because she wrote it, plays everything, sings, and produced it. She did it all herself, and so that is out of the ordinary.

However, the neat thing is: This EP is quite good. The artist, Olivia, has a great voice that she is not afraid to use in unconventional ways. She does things I never thought I’d hear a female vocalist do. On the other hand, the guitars have bite, the drumming is proggy, and the keys create a great ambiance and atmosphere. On top of that, there are wonderful melodies and some rather original song structures that I found tantalizing. This is a great prog album—no doubt about that. Not only does she do everything, she does everything WELL.

So, I hope to hear more from OH. I hope others check out this EP (it’s on Spotify), and I hope she gets some exposure. She’s done a great job of distinguishing herself.”