Review of the Progressive Metal Album Synemotion at Ravenheart Music
by Oh. on April 20, 2015 in reviews Synemotion
24
SHARES
ShareTweet
Subscribe

UK based Ravenheart Music was set up as a hobby in June 2006 by Dave Smith and Aimée Halford (herself a musician), to promote and publicise FEMALE FRONTED rock & metal music.

Many Thanks Ravenheart Music! for your review of Synemotion –

“Lots of instrumentation on this album – and it is damn awesome too from this young lass. The haunting vocals of Olivia first appear on fourth track ‘Deception’, still mainly an instrumental however, with the girl proving that she can shred it too.”

OH. (aka Olivia Hadjiioannou) is a young multi instrumentalist and by all accounts is going to be the new Prog-Rock sensation. In October of 2008, as an amateur violinist and guitarist she left her home town of Athens in Greece for New York, on the verge of the deepest economic crisis in both countries. Through the mirk and mire of lack of opportunity and the mass frustrations of her “lost generation”, she taught herself drums, bass and keyboards, experimented with sound engineering on Logic Pro and Cubase, mixed and mastered her own songs. OH.’s debut album ‘Sleeping World’ was independently released in February 2013, while this her second and mainly instrumental album is scheduled to be released as a Double 12″ Gatefold vinyl album and digital album on April 24, 2015. The songs on the new album journey through the complex emotional states we experience when we are overwhelmed by concerns and fears – escapist feelings in the song ‘Run Away’, anger and frustration in ‘Rumpus’ – wanting to cower and hide in ‘Subterfuge’ – longing and nostaglia in ‘Elegy’ and the experience of disappointment and let-down in the song ‘Deception’. Finally, letting go and receiving the feeling in the song ‘Reception’ – and the awareness and sensation of irony knowing it will all start over again in the ‘World of Warcraft’. The hard rockin’ title track expresses in words of Olivia this entire journey from pain and fear to release and hope. But most importantly the song uncovers how we cope with pain, fear, disappointment, depression, embarrassment and futility, it uncovers what actually happens to us, when we are overwhelmed by experience, and with a strange twist of perception, gifts the listener a path out of the darkness and despair, into an even more compelling and complex palette of emotions and sensations. The song gives hope and strength to walk through life, even with wounds and disfigurement and have an even greater experience than before. Lots of instrumentation on this album – and it is damn awesome too from this young lass. The haunting vocals of Olivia first appear on fourth track ‘Deception’, still mainly an instrumental however, with the girl proving that she can shred it too. Everything on this album is done by Olivia except the mastering, what a talent! And another thing I notice, the tracks are fairly short and sweet, between 3 & 4 minutes, so no long potentially boring solos. Check out the videos to the title track here and the opening track from the album ‘Runaway’ here … well recommended when released 24th April .. 8.5/10 (Dave) 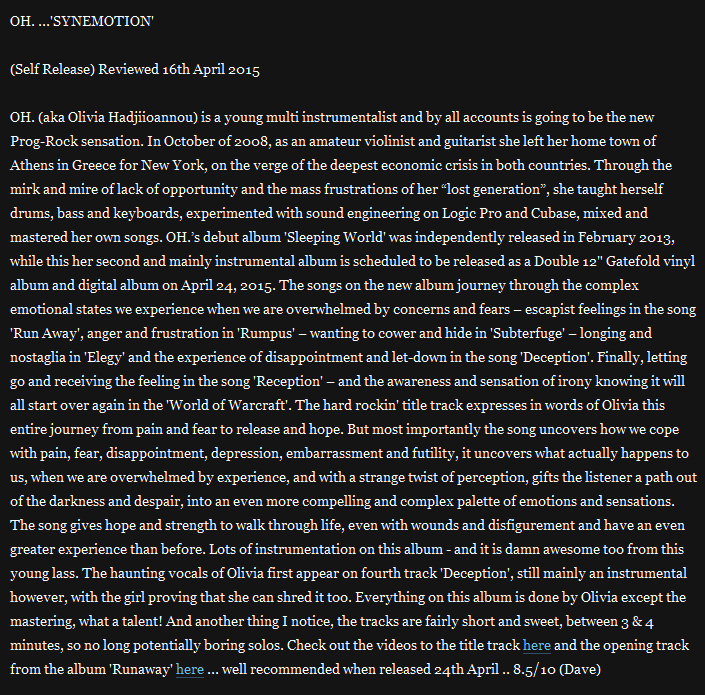