Review of “Metallia” on ‘Flight of Pegasus’ Greek Metal Radio
by Oh. on August 5, 2018 in Radio reviews
184
SHARES
ShareTweet
Subscribe

Flight of the Pegasus is a Greek hard and heavy metal radio station and music news webzine that has been broadcasting since 1990. I want to thank George Politopoulos from “Flight Of Pegasus ” for the wonderful review and support.

The station has recently released a fantastic app on Google Play. Check it out.

The Review by George Politopoulos

Surprisingly, the album doesn’t have to do with typical metal beasts or modernized romance. Behind this moniker is Olivia Hadjiioannou, who not only composes but also plays all the instruments on the record. A creator who has the motive for original expression, the result of her work fortunately does not sound superficial, precisely because she proves to be capable of technical parts of this undertaking.

It has already drawn the attention of progressive circles, but they have yet to analyze the enigmatic, versatile, bold, suspiciously attractive style of its music.

This is one of those circumstances where you think you have heard something similar before, but you can not parallel it with something recognizable. Her material sounds “metallized”, adventurous, and has a cinematic affinity . Above all, however, the sound is disruptive,  the vocal injections arouse this impact. Clearly interesting, in a sense it could be co-production of Shrapnel and 4AD. Check it out. 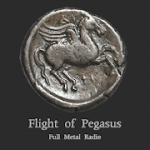 “The Flight of Pegasus” started transmitting in 1990 and for four consecutive years, as a weekly show, on the Cretan FM waveband. Consequently, continued broadcasting in Athens (1996-1997), only to revert to Rethymno in 2000 until 2001. Since 2006, has been introduced to the public through an online platform based in Athens.

It runs all the gamut of hard and heavy music and the musical parameters associated with it over the years.

Has adopted the belief, in which the radio is a mean of entertainment and communication and for that, the program material and structure is updated, enriched and match continuously.