What I Learned at the SNF Conference at the Stavros Niarchos Foundation Cultural Center in Athens [Day #1]
by Oh. on June 25, 2019 in articles Education SNF Conference
188
SHARES
ShareTweet
Subscribe

Don’t forget to read: What I Learned at the SNF Conference at the Stavros Niarchos Foundation Cultural Center “Playing with Complexity” [Day #2]

Today I attended the first day of the SNF Conference at the Stavros Niarchos Foundation Cultural Center in Athens.

What an incredible center! The SNF conference is part of the annual Summer Nostos Festival, an imaginatively curated, eclectic mix of music, dance, sports, original performances, discussions, games, and contemporary art. This year the theme of the 2019 SNF Conference is [Untitled].

The SNF brought a host of high caliber speakers from various backgrounds, and diverse disciplines and spaces, “forcing” them to engage into conversations and debates about subject matters outside their areas of expertise.

The day opened with a keynote speech by Henry Timms, the 11th president and CEO of Lincoln Center for the Performing Arts in New York.

He posed a very interesting question: Why do the arts matter in the world?

He reflected on the words of a predecessor of his, American composer William Schuman. Schuman succeeded John D. Rockefeller III as president of Lincoln Center in 1961.

Timms quoted an essay Schuman wrote in 1962, which made a proposal of what is the true value of the arts.

He said something very relevant to the Greek culture I was brought up in.

We live in a world now where we are so connected by technology but we have become disconnected from each other. And in that world the arts do two things we should be proud of and never apologize for.

There is this pervasive idea that music or the arts will make you better at something else in this country—as if art isn’t enough in itself.

“Nature is a tough teacher, if you make a mistake you die, but if you don’t, you will survive in a better world. I believe if we establish a link of life instead a link of exploitation with nature, we can go a long way. Right now we aren’t doing that.”

In answer to a question from the audience: Are you optimistic that humans will be able to reverse the catastrophic effects of climate change in the next 11 years?

“No, I am not optimistic, we are too slow and we are not taking care of a fundamental equation that was written by Newton. The law of inertia. The mechanism that were put in place. Their known inertia, their known vested interest will go forward for a while. And I think we will face deeper crisis. Because we are stupid human beings, we react to crisis and then we forget.”

One of the most interesting talks at SNF was “Society of Spectacle: Representation as Reality.”

At one point Bill T. Jones gave much food for thought:

“Many performers and makers are self-involved. It seems to be part of the job description. We aren’t saints and most of us are not scientists. And we are battling demons. Some of them are self-generated, some of them are historical. We have to find a way to get out there. Like literally. My body changes when I’m on this stage with you all out there. There is a chemical change. Now, how does that save this fucking world? And that is the rub. And I hope to find out something here today. Because I have almost given up the idea that what I do can, can do anything more then create these little eddies of meaning, little eddies of authenticity.”

Professor Noam M. Elcott brought up some very interesting and thought-provoking points. Noam mentions the book “Society of the Spectacle” by Debord. On the cover of the book is an audience wearing 3D glasses. He goes on to explain:

“That “Spectacle” and VR.. virtual reality will coincide is very much built into Deboud’s theory. Debord’s theory is oftentimes described in terms of our relationship to images. But he insists, that it is not our relationship to images, rather “Spectacle” is the relationship between people mediated by images. So it is person to person mediated by images. The distinction between reality and representation then is one that is no longer quite tenuous. All of us with this giant screen behind us, with camera in the rooms, with iPhones and various devices. The distinction between reality and representation is no longer an operative point. If you lived a day without looking at any representation, it would be a strange day, almost inhuman day.”

On technology being the antithesis of human. The point that technology and humans beings are at odds. About technology encroaching on our reality and taking over.

He says, “What distinguishes us as human beings compared to most other beings on this planet is precisely technology. And this audience hardly needs reminding that “techne” is the root for technology but it is also for the arts. (1:00:00)

One of the key technologies of the human being is writing. Writing is a technology, is a technique that makes us human. In 1935, French sociologist, Marcel Mauss in an incredible essay “Techniques of the Body” says that every culture institutes its own body techniques. It’s not only dance…It’s also how we defecate, how we fornicate, how we walk. These are also techniques oftentimes shaped by our technologies. So I would say to be human is not to find a space outside of technology but rather to negotiate our relationship to techne, with technology and art. 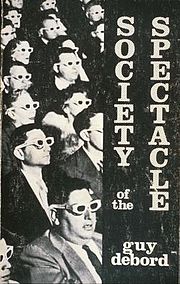 I went outside and had a cup of coffee and browsed the library, visited the Brian Eno exhibit and rode a scooter. I quickly googled Deboud to see the outline of the book. As a starter for future reading I found this

Debord’s aim and proposal is “to wake up the spectator who has been drugged by spectacular images…through radical action in the form of the construction of situations…situations that bring a revolutionary reordering of life, politics, and art”. Situations are actively created moments characterized by “a sense of self-consciousness of existence within a particular environment or ambience”.

Let”s see what we will discover tomorrow