What I Learned at the SNF Conference at the Stavros Niarchos Foundation Cultural Center “Playing with Complexity” [Day #2]
by Oh. on June 26, 2019 in articles Just For Fun SNF Conference
150
SHARES
ShareTweet
Subscribe

The second day of the SNF conference at the Stavros Niarchos Foundation Cultural Center in Athens, Greece.

The SNF conference is part of the annual Summer Nostos Festival, an imaginatively curated, eclectic mix of music, dance, sports, original performances, discussions, games, and contemporary art. This year the theme of the 2019 SNF Conference is [Untitled].

The SNF brought a host of high caliber speakers from various backgrounds, and diverse disciplines and spaces, “forcing” them to engage into conversations and debates about subject matters outside their areas of expertise.

Read about the first day here: What I Learned at the SNF Conference at the Stavros Niarchos Foundation Cultural Center in Athens [Day #1]

I bumped into the wonderful Academy Award and Golden Globe nominated Nia Vardalos. Nia wrote the critically acclaimed New York Times Critics’ Pick stage adaptation of Cheryl Strayed’s bestselling book, “Tiny Beautiful Things” and performed the lead role “Sugar” for three seasons at The Public in New York and California’s State Theater and The Pasadena Playhouse. At the conference yesterday she gave a very moving performance of a scene from “Tiny Beautiful Things” during the talk: Democracy, Theater and All of Life’s Tiny Beautiful Things: A discussion with Oskar Eustis, artistic director of The Public Theater in NYC.

After a morning of talks we were offered a wonderful lunch, at the Delta Restaurant on the 5th floor of the National Opera with wonderful food by chef Dimitris Skarmoutsos.

Ernő Rubik, the inventor of Rubik’s Cube, gave a rare public appearance at the SNF conference on Tuesday. Magician Mark Mitten, the moderator of the talk called, “Playing With Complexity” had asked Mr. Rubik last year if he wanted to come to Greece. And Mr. Rubik responded, “I’m an architect who has never been to Greece!”

Forty-five years ago, Professor of Architecture and Design Ernő Rubik realized the need to familiarize his students with the concept of complexity. So he designed the famous cube, which at first seemed unsolvable, but then, and after causing excitement among some of the world’s greatest minds, became one of the most widespread puzzles of all time.

The entire audience was given a Rubik’s Cube. As I was trying unsuccessfully to solve it, I looked behind me and there was Ernő Rubik. He was kind enough to give me the honor of a photo with him in the lobby of the National Opera House at the Stavros Niarchos Foundation Cultural Center.

Fortunately, Dutch speedcuber Erik Akkersdijk, who was present on the panel as well, was very patient and shared a few of his secrets with me. He has a video on YouTube on the easiest way to solve it.

As I was talking with Nikolaos – Ion Terzoglou, Professor of Architecture at the National Technical University of Athens, he asked the magnificent magician Mark Mitten to perform a card trick.

It is wonderful to meet artists who use their talents to help people in the world. Mark has performed in war zones, hospitals and orphanages…a great man with such positive energy. 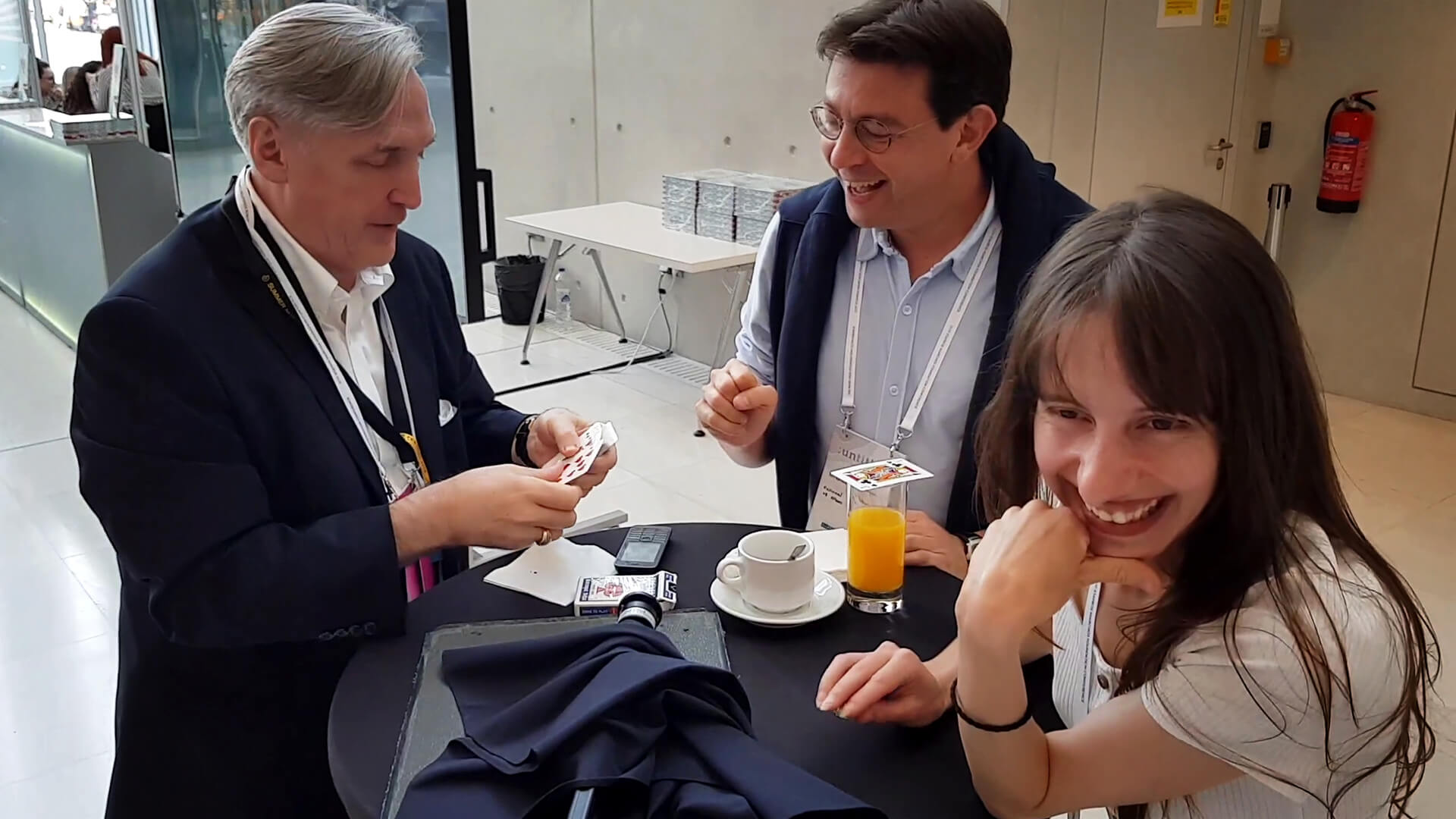 After the conference, I went up to the Lighthouse at the Stavros Niarchos Foundation Cultural Center on the 8th floor. As part of the Summer Nostos Festival and Nostos University, they will hold workshops, elaborate constructions, and competitions.

Bryan Berg, the internationally renowned card stacker, who has made countless playing card structures all over the world and holds two Guinness records taught me how to build a card structure. Behind him is the Nostos University project. He is building a model of the Acropolis with cards.

Here the awesome YouTuber Lily Hevesh, a professional domino artist, helped me figure out how to bridge the two letters of my initials and moniker Oh. and create this awesome domino trick.

Watch and be amazed! 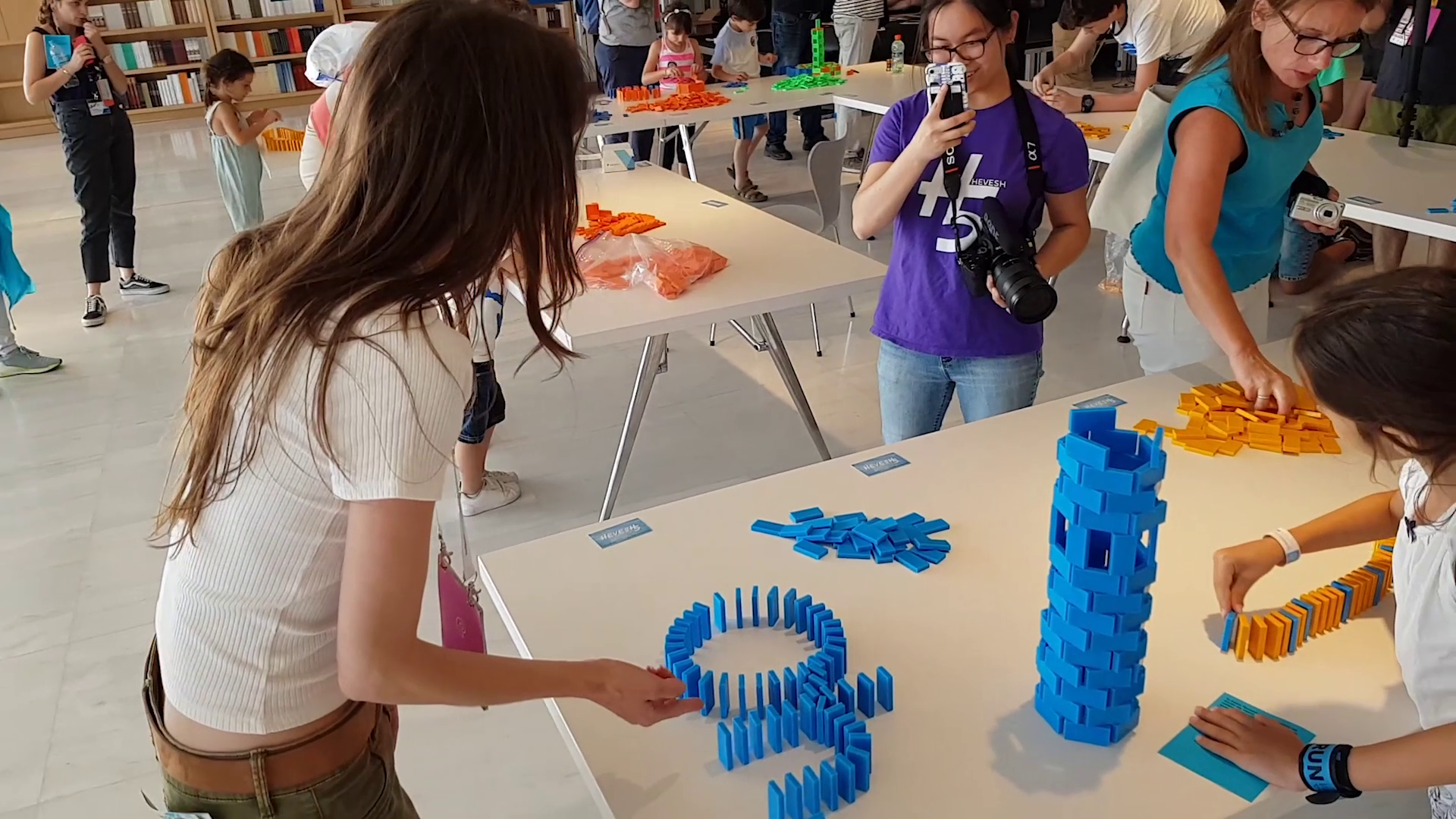 As the sun set, I headed over to get some ice-cream and some great coffee from the Coffee Juice Vanstation!

Inventor of Rubik’s Cube and Teacher of Architecture & Design

Ernő Rubik studied architecture and design in Budapest, Hungary and started lecturing as an assistant professor of design in the 1970s. While trying to give his students a true “feel” for spatial transformation and descriptive geometry, Mr. Rubik developed several 3D constructions, among them his best-known puzzle, the Rubik’s Cube. Patented in 1975, Rubik’s Cube made its international debut at the New York Toy Fair in 1980 to quickly become a global phenomenon as the best-selling toy in history.

In addition to the Cube, Mr. Rubik patented several successful toys and design pieces including the Magic Snake in 1977 and Rubik’s Magic in 1985, selling millions of pieces of both worldwide. He has also remained a prolific architect, designing family homes, and is actively engaged in interior design. He co-founded the Hungarian Engineering Academy, the Palace of Marvels (a science center in Budapest), and most recently the Aquincum Institute of Technology (AIT) where his latest public sculpture is also on display.

A recipient of numerous national and international distinctions, Mr. Rubik has also been engaged in major international projects promoting innovation and creativity. He acted as Ambassador to the European Year of Innovation and Creativity and has been a member of the European Inventor Award’s international jury. On the 40th anniversary of the Cube’s invention, Mr. Rubik opened “Beyond Rubik’s Cube”, a global traveling science exhibition co-produced with Liberty Science Center (NJ, USA) and Google. He is currently working on his book “Cubed” to be published next year. 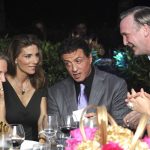 Mark Mitton is a professional magician who is fascinated by using magic to better understand how we see the world. In addition to performing at private and corporate events all over the world, and creating magic for film, television, the Broadway stage, and Cirque du Soleil, Mark tirelessly explores the theme of ‘Misdirection’ from an interdisciplinary standpoint. He regularly presents on ‘Perception’ at universities and conferences in North America and Europe, including the Association for the Scientific Study of Consciousness, and has lectured with the late Nobel Laureate Dr. Gerald Edelman of The Neurosciences Institute.

Mark was the apprentice to legendary sleight-of-hand master and vaudevillian Slydini, and a long-time student of Ozzie Malini – the son of turn-of-the-century magician Max Malini. He has performed for Mick Jagger, Beyoncé, Jay-Z, John Mayer, Katy Perry, Salman Rushdie, Sienna Miller, Mark Messier, Sting, Sylvester Stallone, and many others; at festivals in Europe and Asia; at the Olympic Games; in war-torn Liberia; in hospital wards around New York City; and in a Mexican orphanage with members of the band Guster. His magical hands are featured in a They Might Be Giants video, and he appears in Tony Oursler’s video project ‘Imponderable’, in which he plays Oursler’s grandfather Fulton Oursler.

Lily Hevesh is a professional Domino Artist who produces weekly videos on her YouTube channel, Hevesh5, while also doing professional projects for companies, ad agencies, brands, schools, and others seeking Domino Art. Currently she has over 750 million total YouTube views and 2,400,000 subscribers, making her the #1 most subscribed Domino Artist on the web. In addition to creating domino videos on her YouTube channel, Lily has done significant commercial projects for brands including Disney, Marvel, Ford, Honda, LEGO, Pizza Hut, and more. She has worked with Will Smith for the feature film Collateral Beauty, as well as Katy Perry for the launch of her new album Witness. Her dominoes have been featured on NBC, FOX News, Nickelodeon, CNN, CBS, Saturday Night Live, The Tonight Show Starring Jimmy Fallon, and other various sources.

Bryan Berg is the inventor of cardstacking on a grand scale. He is self-taught and has been developing his techniques — using no tape or glue or folding — since childhood. Berg set the record for Tallest House of Freestanding Playing Cards initially in 1992, and has held that record and many others continuously since. He holds degrees in Architecture from Iowa State University and Harvard.