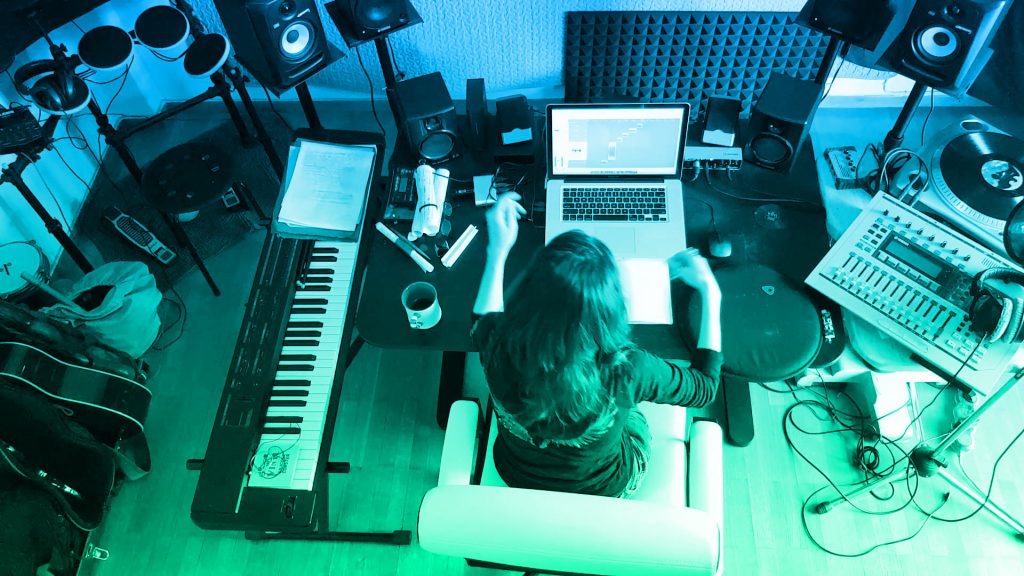 “Man cannot discover new oceans unless he has the courage to lose sight of the shore.” – Andre Gide

Why is it hard to find new music?

There was a recent discussion on a Facebook thread posted by Lucas Biela, the host of the ISRC radio show ‘Metal Madness’. He posed the question as to why artists who are “off the beaten path” don’t get a lot of attention by the major media outlets.

“What do you guys think, do you think our world has hard time to accept “difference” or is it that labels/zines/radios don’t want to spread the word about artists that won’t gain them audience/readers, favouring the big names or recurring names in the industry, and preventing people from discovering new directions in music?”

You can read the conversation below. I’ve noticed that in reality, this situation exists not for lack of interest but rather it is common phenomenon that is within all enterprise. There are a lot of factors to be taken into consideration. Also, it is hard to clarify, if the reasons are simplified and/or reactions polarize into factions of us/them.

The premise is that ‘out-of-the-box’ art is not accepted by the mainstream; taking into consideration the music is first and foremost “good enough”. Let’s take-a-look at some of the variables. 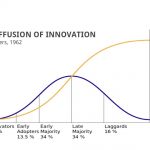 Photo: Diffusion of innovations is a theory that seeks to explain how, why, and at what rate new ideas and technology spread.

There is a theory called “diffusion of innovations.” It is true in all facets of life and business. It exists in the tech and publishing industries but also in the music industry.

If you take the classic example of the cell phone for instance – the experts say that first there are the innovators who are like the 2% for many years, then come the early adopters who are that few 13% — the tastemakers — and if enough of them like it, then over years it is taken in by the Early and Late Majority—which is the 70%— later even 5-10 years later come in the Laggards —and now we all have cell phones.

Though algorithms are used to help sift through all the content out there and are supposed to help music discovery, they are more often used by outlets that are all too easily tempted to “feed familiarity”. The Verge has an interesting article, “In 2018, I want to find new music without using algorithms.” The author suggests trusting friend’s playlists, not using Spotify’s algorithm to create that playlist and reading small blogs etc… This leads us into the “theory of tribes”.

With so much new music out there, it is hard to sift through it all. Many rely on “tastemakers”. Tastemakers are people who decide or influence what is or will become fashionable. They are also called “influencers” on social media. These people spend a lot of their time and money, sifting through thousands of new releases. They have blogs, online magazines and small and large followings. Many consumers rely on these “tastemakers” to find what is new mostly because of time constraints.

Business Insider confirms this in an article based on a Deezer study that stated:

The music streaming service surveyed 1,000 Brits about their music preferences and listening habits. 60% of people reported being in a musical rut, only listening to the same songs over and over, while just over a quarter (25%) said they wouldn’t be likely to try new music from outside their preferred genres.

The peak age for discovering new music, the results suggested, was 24. This is when 75% of respondents said they listened to 10 or more new tracks a week, and 64% said they sought out five new artists per month. After this, though, it seems people’s ability to keep up with music trends peters off.

Some of the reasons the survey revealed were people being overwhelmed by the amount of choice available (19%), having a demanding job (16%), and caring for young children (11%). Nearly half of respondents said they wished they had more time to dedicate to discovering new music, so at least for that 47% it wasn’t due to a lack of interest.

“With so much brilliant music out there, it’s easy to feel overwhelmed,” said Adam Read, the UK & Ireland music editor at Deezer. “This often results in us getting stuck in ‘musical paralysis’ by the time we hit our thirties.”

Reaching out to these tastemakers takes a lot of legwork. Also, many tastemakers have morphed into mini-mainstream media outlets which also limits discovery over time.

The “1000 true fan theory” expounds the value “having your own email list” and not just a bunch of social media followers that could disappear if that platform fails. It urges the artist to do the legwork and find that 13% (of their tribe) on their own. For example, if the goal is  500-5000 sales each time they release, their lists or combined social media engagement needs to top 50,000-500,0000 (because 1000 engagements = 1 sale). That means a lot of one on one with each fan, presenting your music and collecting emails from gigs, social media etc. For larger groups that requires a street team.

The combination of your own legwork and an influencer’s attention and tribe might create ‘majority’ when these “smaller tribes” merge – lets’ say a hundred small tribes of 1000 people each, that’s 100,000 ears. That might draw the attention of a major magazine per se.

The original post on Facebook, questioned why major magazines don’t pay attention. The real question should be why should a magazine that is trying to sell to the “majority” take interest in an innovation? It won’t sell copies or please their audience. Their audience wants what is familiar.

This brings us to another theory to take into consideration — the “nostalgia theory”.

There is an interesting article online in Slate, Neural Nostalgia: Why do we love the music we heard as teenagers? which says:

“To understand why we grow attached to certain songs, it helps to start with the brain’s relationship with music in general. When we first hear a song, it stimulates our auditory cortex and we convert the rhythms, melodies, and harmonies into a coherent whole. From there, our reaction to music depends on how we interact with it. Sing along to a song in your head, and you’ll activate your premotor cortex, which helps plan and coordinate movements. Dance along, and your neurons will synchronize with the beat of the music. Pay close attention to the lyrics and instrumentation, and you’ll activate your parietal cortex, which helps you shift and maintain attention to different stimuli. Listen to a song that triggers personal memories, and your prefrontal cortex, which maintains information relevant to your personal life and relationships, will spring into action.

But memories are meaningless without emotion—and aside from love and drugs, nothing spurs an emotional reaction like music. Brain imaging studies show that our favorite songs stimulate the brain’s pleasure circuit, which releases an influx of dopamine, serotonin, oxytocin, and other neurochemicals that make us feel good. The more we like a song, the more we get treated to neurochemical bliss, flooding our brains with some of the same neurotransmitters that cocaine chases after.

Music lights these sparks of neural activity in everybody. But in young people, the spark turns into a fireworks show. Between the ages of 12 and 22, our brains undergo rapid neurological development—and the music we love during that decade seems to get wired into our lobes for good.”

There are some pearls of advice to be found. First would be to focus on finding your tribe and/or similar tribes and tastemakers. That means getting your music out there to those who are sifting through the now vast and overwhelming selection of music available.

The diffusion of innovation theorists also concluded that a practical step would be to somehow relieve the ‘cognitive dissonance’ of the music consumer. Cognitive dissonance is the mental discomfort/psychological stress experienced by a person who simultaneously holds two or more contradictory beliefs, ideas, or values. This could be allayed by adopting some visual and/or acoustic cues that bring in some elements of the familiar.

The bottom line is that it all takes an extraordinary amount of work to pull all this off.  It boils down to tending your tribe, finding other tribes/collabs to merge with, embracing some elements of the familiar and possibly positioning yourself in a way to get a tastemaker’s attention.

The original thread on FB.