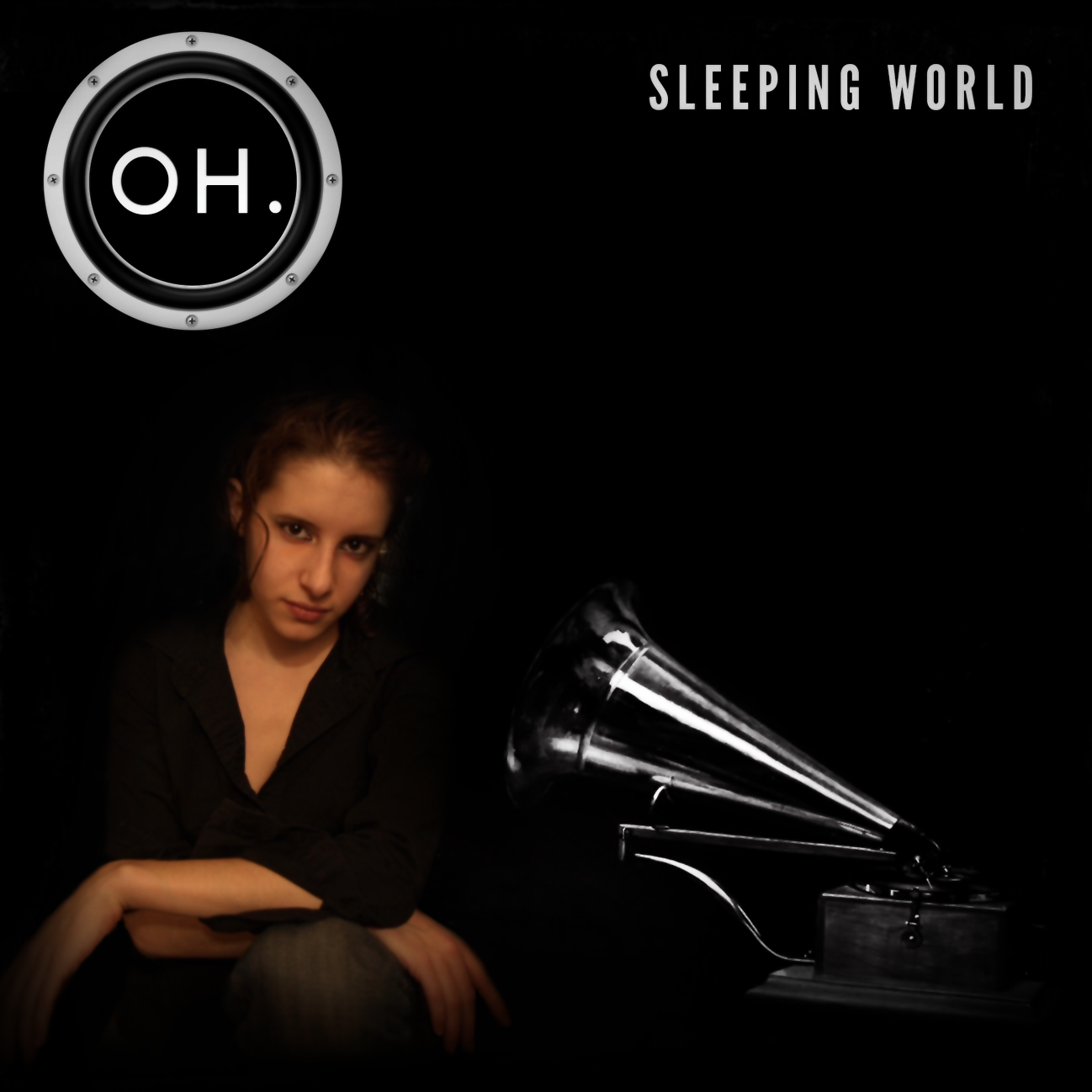 Caught between the deep economic crises in both Athens, Greece and NYC; she released the album “Sleeping World” in February 2013 on iTunes and other digital distribution channels with a video clip for the song “Trials”.

“The album’s hauntingly candid lyrics and music are a conscious and direct wake-up call to the frustrations of our crisis-laden souls in these trying times of austerity, lack of opportunity, wasted talent and false promises. With irony and sarcasm her performance reveals her “lost generation’s” total awareness of the emptiness of quick fixes and the futility of chasing false idols — cutting to the root cause of our world’s self-destructive impulses.”

She composed (music and lyrics), performed (guitar (electric and acoustic), bass and violin (electric), drums, piano and voice), arranged, recorded, mixed and mastered the album in her recording studio.

OH. was given the honor – with her first release – to be entered into Prog Archives in the Crossover Prog category.

She also took #1 first place in the international BEAT100 World Music Video Chart in July 2013. Her video clip “Trials- a song for the world’s lost generation” won first prize, international recognition and a global press release. The video received over 4000 votes and 21,000 views.

Nick Katona of Melodic Revolution Records in the US played her album for the first time on his radio show as DJ Revolution on aiiradio.net in May 2013. She eventually was picked up by other DJ’s on the network and on other online progressive rock radio stations.

The album received a great response from critics in the US and in Europe.

“I first discovered this brilliantly talented Greek musician “OH” on one of my websites called Power of Prog. I was immediately drawn into her video Trials which is the opening track from her debut EP “Sleeping World”. Like a moth to a flame I was drawn in with her hauntingly beautiful voice and the epic sound of the music. I needed to know more… wanted to hear more.

Fortunately, I discovered her bandcamp page where I seemed play her album over and over, no such thing as too much with this unbelievably talented musician. In a nutshell, if you like quality music in the fashion of indie artist Happy Rhodes while at times, sounding like a cross between Kate Bush & Tori Amos but with of a more gripping edge. If you’re looking for something new and refreshing than give this amazing lady a listen. This is first class cross-over prog at its best I highly recommend you check out “Sleeping World” by OH.”
Nick Katona ~ Power of Prog

“In terms of instrumentation, there’s beautiful acoustic guitar and some great heavier riffing, and a smattering of smokin’ lead as well. There’s also a few catchy synth hooks, such as the one featured in “Have You Ever”, which is probably my favourite track. On this song Olivia ramps it up with some chugging distorted guitar and those amazing vocals. This is definitely one of the proggier tracks and also features some interesting percussion to add some flavour. While there’s definitely plenty for prog fans to take away from this EP, there’s also no shortage of mainstream appeal and I wouldn’t be surprised if there are big things in store for OH.

Thematically the EP revolves around some of the struggles of modern life in our rapidly changing society. Olivia delivers the lyrics in a range of styles, from soulful and moody to strident and at times raw and unrestrained. And when she cranks it up, it’s verging on spine tingling.”
Mark Healy ~ Prog Archives

She does things I never thought I’d hear a female vocalist do. On the other hand, the guitars have bite, the drumming is proggy, and the keys create a great ambiance and atmosphere. On top of that, there are wonderful melodies and some rather original song structures that I found tantalizing. This is a great prog album—no doubt about that. Not only does she do everything, she does everything WELL.