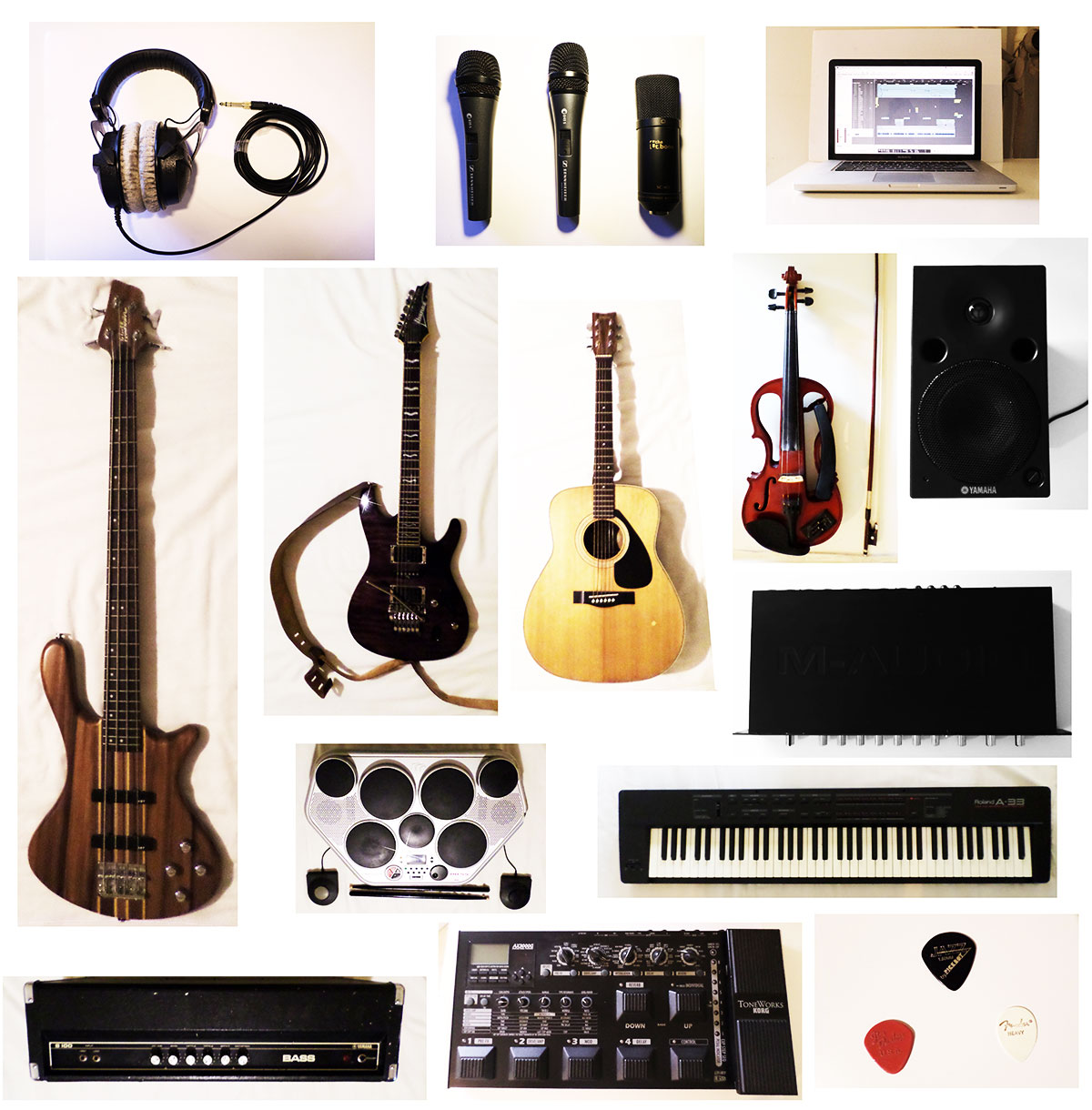 This is a small peek at the instruments and equipment I use. I always find it interesting when entering a studio (from basements to high tech) to see what other sound engineers and musicians have collected.

As always, there are as many stories, as there are people in the world. And some have stories that could fill a book or long, detailed and sometimes quite emphatic opinions of what is the best or not.

In my case, it is a combination of trial and error, what I have been gifted, lent or guided to purchase on a whim or hunch. And sometimes it is simply ‘meaning’, the memories, the person who gave it to you, the place, the time and in those cases, it is great that we have software now, so that we can still play our beloved instrument and tweak the sound a bit to get closer to what we imagine.

I like that this soundcard has a bright sound, not too bright to be annoying. Other sound cards I’ve used sounded way too muddy. I prefer working M-audio Profire 2626 because it never disappoints me while I’m building the sound that I like.

Yamaha MSP5A speakers
I love these speakers. They are not easy to work with when mixing and mastering, because they lose some lower frequencies and show too much of the higher frequencies. But if you get to know them, they are pretty amazing.

DT 770 pro headphones
What I truly like about these headphones is that the moment you put them on, your feel as if you are in a sound-proof studio. They help me hear the lower frequencies my speakers deny me and they are gentle to the eardrum and quite comfortable to wear.

Yamaha B100 bass amplifier
My father gave me this amplifier, it makes a really nice round bass sound and it is a very strong amp. It also has drive if you want a more “rock” sound. It won’t let you down.

Roland A-33 midi controller
The best of the best! All my musician friends were somewhat envious because if its incredible touch sensitivity, which allows so much more expression.

T.Bone SC400 microphone
For musicians, every microphone has a story. This particular microphone I use for my main vocals and acoustic instruments. I’ve tried many microphones in studios from the very expensive 3000 EUR ones and down to super cheap ones. I threw more tracks away with the expensive mics than this T.Bone I was given as a gift. So it is my favorite. Of course, microphones in general are a very personal things.

Sennheiser e845S – 835s
These two Sennheiser microphones, I use sometimes for second voice and choruses. They are nice because they give the idea of depth and they aren’t too strong. They have a soft sound that blends very nicely if you want to have backing vocals.

Korg AX3000G modeling signal processor
I use this when I play solo guitar for the pedal, I mostly use it for the “Wah-Wah” and the volume because when you are playing solo you have to control the volume.

CV-210E Active Control System violin EQ with preamp
My violin is a very cheapo violin and the sound is awful, I must admit. The only item on it in order to recognize its brand is the EQ with preamp glued to its body, there is no other brand name on it. But, even though it sounds terrible, it really like how it feels to play and because of that and maybe because it was my first violin when I was 14 years old, I end up doing double work to touch up the sound later because of this nostalgia.

Ibanez S 470 DXQM electric guitar
This guitar my Uncle Chris bought for me from Manny’s Music on West 48th Street, between 6th and 7th Avenues in NYC in 2005. He took me there one day and he told me, “pick any guitar you like”. It was a spectacular day. What I like about this guitar is that the neck is thin and pleasant while playing. I like the heavy sound it has. It is a metal guitar essentially, but lightweight. When you change the magnets with the switch – well, you get any sound you can imagine.

Washburn Taurus bass
This is the first instrument, I actually bought with my own savings. All my other instruments I inherited or was gifted. This bass is unique because it is a one piece bass (the neck and body are one piece), it has a great bass sound, very pleasant to play, the neck has the perfect fit and as I’ve heard it was a limited edition, I’m not sure, but whenever I lug it around to different studios, everyone wanted to buy my bass, so I guess there is something special about it.

Yamaha DD-55 electronic drum set
This was a gift from Santa Claus, when I was a young girl. Of course, they aren’t as pleasant to play as real drums or fun like an electronic drum kit, but they definitely do their work. You can hardly tell the difference from an acoustic kit.

Picks
Jazz 1, fender heavy
I like my picks small and hard.

Logic Pro 9 Software
I’ve worked with Cubase, Abelton Live, Protools etc etc. I’ve come to like Login Pro 9 (9 and not the newest version because my failing Macbook Pro from 2008 can’t update anymore). I like the shortcuts and it helps you focus more on recording and less on clicking, searching for plugins and folders.

Macbook Pro (2008)
My poor Macbook is on its way out. It was amazing in its time. And was probably one of the first of the 2nd generation Macbook Pro’s released in October 2008 for my birthday.