Ernő Rubik and Speedcuber Erik Akkersdijk “Playing with Complexity” What I Learned at the #SNFConference
by Oh. on June 27, 2019 in articles Education Just For Fun SNF Conference
198
SHARES
ShareTweet
Subscribe

“Like after a nice walk when you have seen many lovely sights you decide to go home, after a while I decided it was time to go home, let us put the cubes back in order. And it was at that moment that I came face to face with the Big Challenge: What is the way home?” — Erno Rubik

I had the honor of meeting Ernő Rubik who made a rare appearance at the SNF Conference at the Stavros Niarchos Foundation. Ernő Rubik is the Hungarian inventor, architect and professor of architecture who invented the Rubik’s Cube in 1974. It is one of the most popular puzzles of all time.

“Erno has always thought of the Cube primarily as an object of art, a mobile sculpture symbolizing stark contrasts of the human condition: bewildering problems and triumphant intelligence; simplicity and complexity; stability and dynamism; order and chaos.”

A Rubik’s Cube consists of 26 small cubes that rotate on a central axis; nine coloured cube faces, in three rows of three each, form each side of the cube. When the cube is twisted out of its original arrangement, the player must then return it to the original configuration.

“Space always intrigued me, with its incredibly rich possibilities, space alteration by (architectural) objects, objects’ transformation in space (sculpture, design), movement in space and in time, their correlation, their repercussion on mankind, the relation between man and space, the object and time. I think the CUBE arose from this interest, from this search for expression and for this always more increased acuteness of these thoughts.”

The entire audience was given a Rubik’s Cube. As I was trying unsuccessfully to solve it, I looked behind me and there was Ernő Rubik. He was kind enough to give me the honor of a photo with him in the lobby of the National Opera House at the Stavros Niarchos Foundation Cultural Center.

His object spawned not only Rubik’s Cubism art, but also the competitive sport of Speedcubing.

Fortunately, Dutch speedcuber Erik Akkersdijk, who was present on the panel as well, was very patient and shared a few of his secrets with me. He has a video on YouTube on the easiest way to solve it. 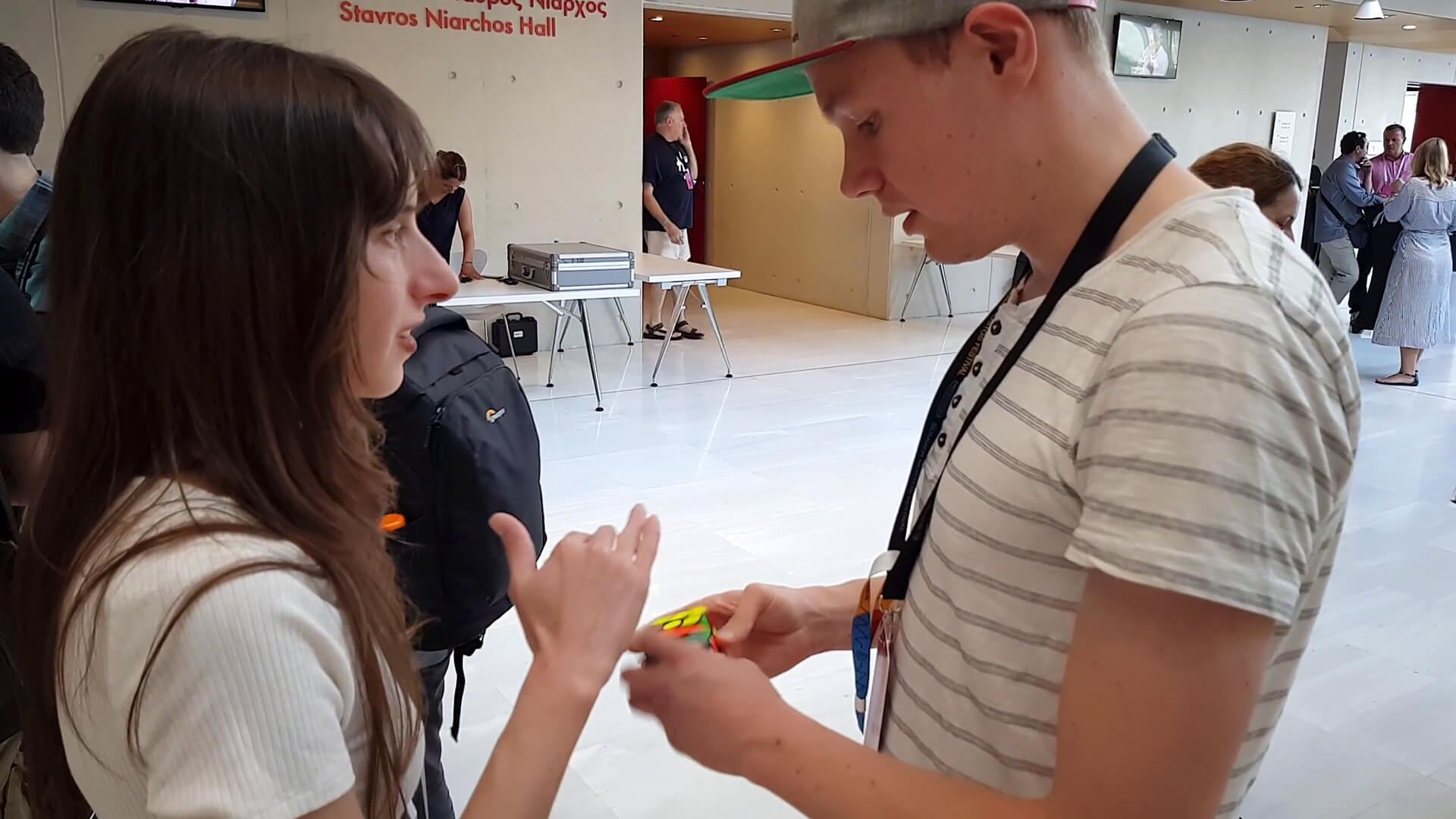 “If you are curious, you’ll find the puzzles around you, if you are determined, you will solve them.”

There are 43 quintillion possible ways to return the cube to its original configuration. It makes you think there may be 43 quintillion ways to solve the problems of our lives.

Inventor of Rubik’s Cube and Teacher of Architecture & Design

Ernő Rubik studied architecture and design in Budapest, Hungary and started lecturing as an assistant professor of design in the 1970s. While trying to give his students a true “feel” for spatial transformation and descriptive geometry, Mr. Rubik developed several 3D constructions, among them his best-known puzzle, the Rubik’s Cube. Patented in 1975, Rubik’s Cube made its international debut at the New York Toy Fair in 1980 to quickly become a global phenomenon as the best-selling toy in history.

In addition to the Cube, Mr. Rubik patented several successful toys and design pieces including the Magic Snake in 1977 and Rubik’s Magic in 1985, selling millions of pieces of both worldwide. He has also remained a prolific architect, designing family homes, and is actively engaged in interior design. He co-founded the Hungarian Engineering Academy, the Palace of Marvels (a science center in Budapest), and most recently the Aquincum Institute of Technology (AIT) where his latest public sculpture is also on display.

A recipient of numerous national and international distinctions, Mr. Rubik has also been engaged in major international projects promoting innovation and creativity. He acted as Ambassador to the European Year of Innovation and Creativity and has been a member of the European Inventor Award’s international jury. On the 40th anniversary of the Cube’s invention, Mr. Rubik opened “Beyond Rubik’s Cube”, a global traveling science exhibition co-produced with Liberty Science Center (NJ, USA) and Google. He is currently working on his book “Cubed” to be published next year. 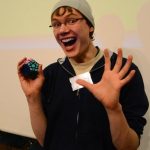 Erik Akkersdijk is a Dutch speedcuber from Enschede, the Netherlands. He is known for setting numerous world records in 2×2, 3×3, 4×4, 5×5, and Megaminx, including 3×3 single record of 7.08 seconds, which stood for over two years. He first achieved world level in 2×2 speedsolve and Megaminx in 2007, Erik climbed to the top in 3×3, 4×4, and 5×5 by 2008, setting world records in each event. Erik finished second at the World Championship 2009. He is one of the few cubers to have successfully remained competitive at a world level since the rise of Feliks Zemdegs, taking back his 4×4 world record in 2010.

Erik has long ranked first in Medal Collection, with 36 Gold in 3×3 and 320 Gold overall.

Erik studies Environmental Management at the Saxion University of Applied Science in Deventer, the Netherlands.