Since 2011, Markwin Meeuws a former reviewer for the Dutch website Progwereld, has developed and maintained the website Progstreaming. Progstreaming was one of the first websites, (even before streaming media became popular) that presented full album streaming for newly released albums and digital downloads. The site embeds the players from Spotify, Bandcamp, Deezer etc, with links to purchase for each album. It is a monumental work for the presentation of new music. He also has sites for metalstreaming, classicalstreaming and allstreaming as well.

Progwereld was established in April 2001. Since then, the site has gradually become the largest Dutch-language website for symphonic and progressive rock in the Netherlands and Belgium.

Progwereld ran a feature titled “De Wereldse Tien”. This was an overview of the best prog albums of the moment, compiled by Progwereld’s readers. This chart has become a household name in the world of progressive rock, and every month a host of fans loyally send in their votes.

What is Progressive Chart?

Progressive Chart is a medium for deciding which albums belong to the top of progressive rock to be decided by voters. You can simply send in their top 5 of recent favourites via the website (released no more than a year ago, no collections or live albums). Each month this will produce an up-to-date overview of albums in this genre which really matter.

Markwin jokingly said when I asked him:

“Make sure they follow the rules, so the must think of four other progrock albums from the last year. Votes that have your album 5 times or votes that also add The Dark Side of the Moon don’t count at all, 0 points. Yeah, I’m harsh …”

1. Go to Progstreaming first and check out all the new releases and then

2. Pop on over to the Progressive Chart and cast your vote for 5 (yes 5 different) prog albums released in the last year.

You can stream Metallia on Progstreaming here

Progressive Chart has a cool form on their website to cast your votes. 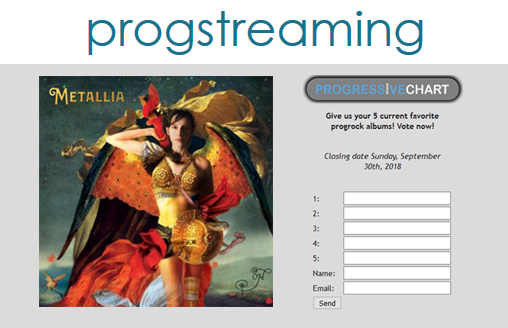