What You Need to Know About Getting Your Music Discovered in the New Music Industry
by Oh. on August 5, 2019 in DIYmusician Music Industry
243
SHARES
ShareTweet
Subscribe

I recently came across a post on Facebook by a friend and colleague Warren Russell who was trying to get a grip on Pandora’s music discovery for a release and if the “music suggestion” on Pandora is genre related. I assume it was a concern because he wants the music discovered.

There are two main issues and a couple myths to be debunked before trying to understand how music discovery works.

First myth: Thanks to digital distribution all music will have a chance to get heard and that people will want to listen to music by artists that aren’t popular (long tail).

What music are people listening to?

According to a recent article by Tim Ingham on Music Business Worldwide, “Close To A Third Of Spotify’s 217m Users Are Playing Ed Sheeran Following Release Of His New Album”

“Sheeran’s 69.15m listeners makes up just shy of 32% of this figure, suggesting that the Atlantic-signed star’s music is currently being played by almost a third of Spotify’s total global audience. Witness the fact that on Tuesday (July 16), Sheeran had 19 songs in Spotify’s Top 200 global daily chart.”

This just confirms this 2014 article by Robert Cookson in the Financial Times, Why The Music Industry’s “Fat Head” Is Eating Its “Long Tail” was right.

Cookson mentions a quote from a 2006 bestseller by Chris Anderson,

“The theory of the Long Tail is that our culture and economy is increasingly shifting away from a focus on a relatively small number of “hits” (mainstream products and markets) at the head of the demand curve and toward a huge number of niches in the tail. As the costs of production and distribution fall, especially online, there is now less need to lump products and consumers into one-size-fits-all containers. In an era without the constraints of physical shelf space and other bottlenecks of distribution, narrowly-targeted goods and services can be as economically attractive as mainstream fare.”

Well it appears that Anderson was being a bit idealistic according to Cookson. Anderson was right about digital distribution making more music available online. There are 40,000 new songs added to Spotify a day in 2018 alone. In the article, “According To Spotify Founder Says “close To 40,000” Tracks Added To Streaming Service Every Day” on Haulix.

“with more than 50 million tracks now available on Spotify, and growing by close to 40,000 daily, the discover[y] tools we’re building have never been more important to consumers and artists alike.” Daniel Ek, speaking to investors on April 29, 2019

Let’s put that figure into perspective.

Forty thousand tracks per day equal about 280,000 songs a week or around 1.2 million tracks per calendar month. In a year, this volume would add up to a whopping 14.6 million.

The point is though that most of these songs go unheard.

“Faced with an almost endless choice of music, listeners are overwhelmingly listening to the hits. The “long tail” is looking decidedly thin and anemic compared to the “fat head”.

“The top 1% of artists account for 77 % of recorded music income according to research by Mark Mulligan of Midia Consulting.”

“Using data compiled from record labels, distributors, artists, managers and music services, Mark Mulligan of Midia Consulting found that the “superstar economy” is even more extreme in digital services than it is in physical stores.”

He says part of the problem is the digital storefront, he says:

“A digital store or service has a home page that often has to squeeze onto a few square inches of smartphone screen while a high street store has dozens of square feet of window space and then hundreds of square feet of front-of-store display space through the doors.” New ways of sharing and discovering music online could yet inject more life into the “long tail”, but Mr Mulligan is convinced that most consumers will stick to the mainstream and music is going to remain a superstar economy.

“The marketplace has shown us that humans are just as much wandering sheep in need of herding online as offline.”

“The concern with a winner-takes-all economy is that the population gets further segmented into winners and losers with little in-between, winnowing the middle class and increasing inequality.- Alan Krueger Rockonomics“ 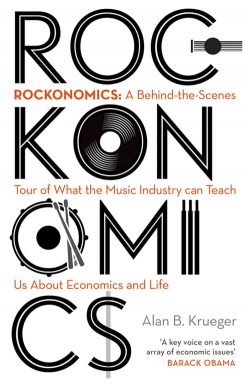 He talks about this ‘Superstar Effect’, where the top performers in a field receive a disproportionate share of the income, a term first broached by Sherwin Rosen in a 1981 paper.

“It’s harder to make a living because the middle ground has been eroded,” Krueger said during a 2017 interview on the subjects animated in the book. “And music is the leading edge of what’s been happening to the economy overall. You see it clearly in the media, where news is now free.”

“Krueger’s thoughts stand in contrast to the optimism of technology enthusiasts who believed freeing content from distribution constraints would enable a wider range of choice. This view, epitomized by author Kurt Anderson and his book, “The Long Tail,” has fallen short in practice.

While digital retailers do undoubtedly have more room to carry more varied music, people don’t have the energy or patience to winnow down their choices. (Psychologist Barry Schwartz calls this the Paradox of Choice, which suggests that an abundance of choice creates more anxiety than a more limited menu.)

“I think that is exactly right and that’s what’s happening in music. That’s why the older rock stars have done so extraordinary well,” Krueger said, citing their stature compared to newer artists. “I think that there’s been a flight to quality because there is so much confusion and so much choice.”

So now that this myth about digital distribution making it easier for music to be discovered is debunked.

Here is a second consideration.

Where does music discovery start? 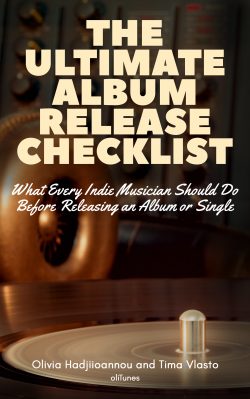 In the ebook, The Ultimate Album Release Checklist, we compiled a list of over 50 things you need to do just to make a release viable online – just the bare essentials – just enough to somewhat level the playing field with the thousands of other artists releasing online everyday.

In one of the steps, we mention Last.fm for example.

In a book called, “Music Recommendation and Discovery: The Long Tail, Long Fail, and Long Play in the Digital Music Space” by Òscar Celma, he says about music discovery:

“The results show that the Last.fm social-based recommender tends to reinforce popular artists, at the expense of discarding less known music. Thus, the popularity effect derived from the community of users has consequences in the recommendation network

“This reveals a somewhat poor discovery ratio when just browsing through the network of similar music artists.” 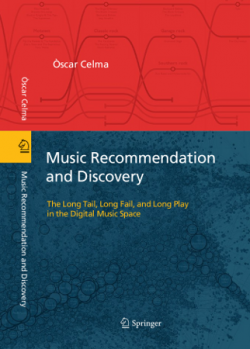 “The first users that enters to the system heavily affects the initial relationships among the items, After that, the users that come later, find an environment shaped by earlier users. The new users will be affected by the early raters that create the similarities among the items. This does not always guarantee novel music recommendations…. Thus, these might not be considered good novel recommendations to that user, but familiar ones. Popularity has a strong effect in the recommendations, because it presents assortative mixing, there is a strong correlation between an artist’s total playcounts and the total playcounts of its similar artists. Most of the hubs in the network are popular artists and it is not easy to reach relevant Long Tail artists.”

Now this book was written in 2010, the Last.fm of our present day are playlists. How hard is it to get on an influential playlist? Well, just about as hard as it was to get signed by a label.

And to top that off, there are rumors playlists are dead and podcasts are the future, “Spotify, the Decline of Playlists and the Rise of Podcasts”

A trick I’ve heard years ago was that some small labels were getting their listeners on Spotify for example, to listen to their new release and another band from the genre on a playlist — thinking that will trick the algorithm in associating the two songs.

Not sure if that works anymore with AI driven discovery which is mostly based on either listening behavior/ratings or acoustic features like rhythm, pitch etc. which places like Last.fm, Spotify, Allmusic, Pandora use.

So how do you increase your playcounts or influence listening behavior?

Well according to the Music Consumer Insight Report – 75% of users listen to music posted on social media and 45% of users spend time listening to music on YouTube. Maybe that is a place to start building those playcounts. If you aren’t a major label with a huge advertising budget, it all comes down to gaining listeners one by one on social media or through gigs and other out-of-the-box approaches in the end.

The same Mark Mulligan of Midia Consulting who mentioned the 1% above years ago, recently published an article “Niche is the New Mainstream” saying “anyone able to run their own self-serve campaigns on platforms such as Facebook, Snapchat, YouTube and Google search. The result is that labels and artists of all sizes can reach their global audiences.” 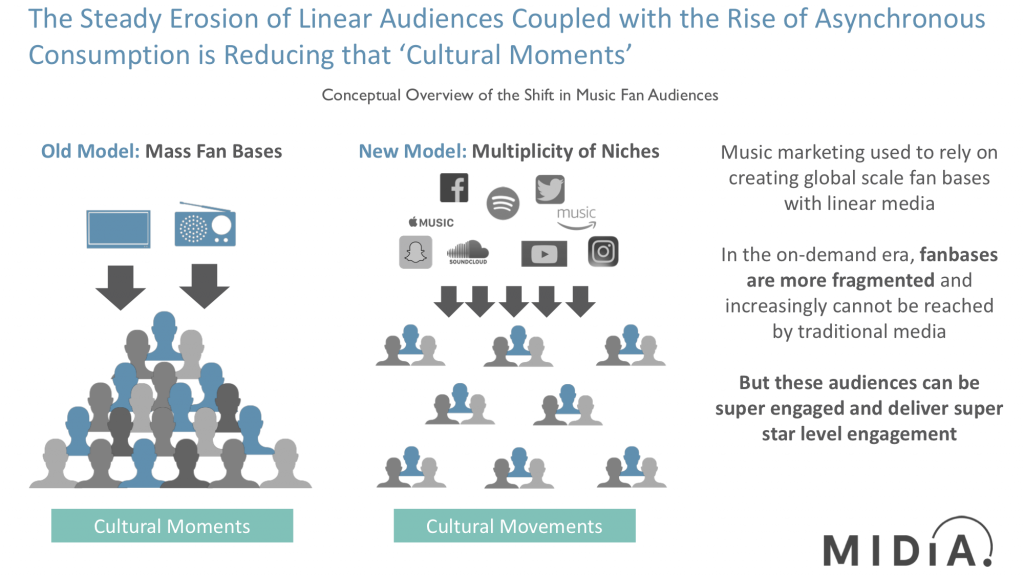 That needs a budget which most indie artists don’t have. And there’s the problem again and a famous quote,

So what do you do? Build incrementally, first get the basics done, learn how to hyper-target your niche, learn how to target relatively cheap ads on FB, Insta etc and look for as many free “out-of-the-box” ways to build exposure until hopefully you reach some critical mass.

This worked for my last release “Metallia” so there is some truth to working small rather than throwing out a large net. You have to care about your listeners as much as your music in the end if you follow the new model. It’s not as great news as these marketing experts say, because it leaves a musician a lot less time for making music. And then your fans are like – “When are you going to release again? What’s next? Two weeks after your new album. Now, that’s another issue to discuss in another post.